..."The countryside that lies between Valladolid and Segovia, except for some pine groves, spreads out in a vast, wide plain which gets lost in the horizon. 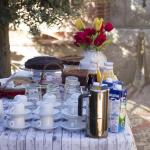